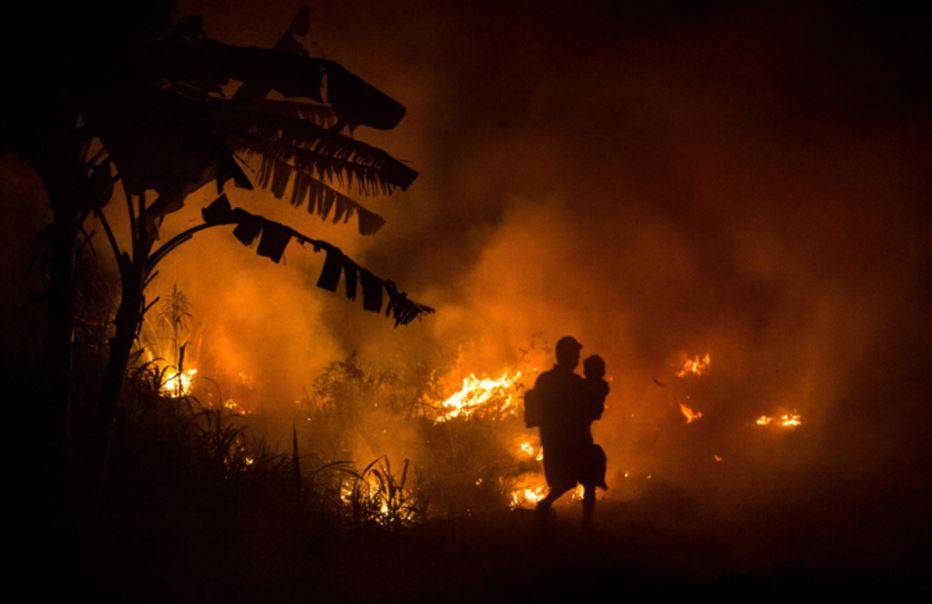 “My husband had put his heart and soul into building it and making it what we wanted,” Lorrie Colburn, 70, wept in tears. “That’s where we’d live. That’s where we raised our children. It was a wonderful gathering place”.

Colburn was one of the victims of the wildfire in Southern California that cost her residence at the end of last year. It was all smouldering rubble, where she and her husband lived for 43 years, renewed their vows in the backyard and raised their three kids. 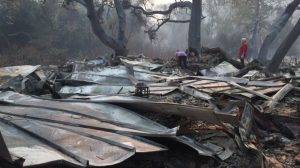 The remnant of Colburn’s house after being wiped out by wildfire. Photo courtesy of Matt Hamilton, Los Angeles Times.

More than 100,000 wildfires have cleared 4 to 5 million acres of land in the United States every year. In the faraway South-east Asia region, wildfire occurs almost every year in Indonesia — a single country with the largest population of Muslims at 13 percent of the total Muslims worldwide — where it is said to be deliberately caused through the practice of slash-and-burn method to clear vegetation for palm oil, pulp and paper plantations.

The fire there becomes uncontrollable, spreading to the forest. Haze then starts to cover the region for months, leading to deaths and respiratory illness for around half a million people, including in the neighbouring countries.

Just for the record, a blazing wildfire could soar at a one-metre height at 800 degrees Celsius (1472 degrees Fahrenheit) on average.

“We know how awful it is to see the disease symptoms experienced by babies and children in our care,” said Nursyam Ibrahim from Indonesian Medical Association on Borneo, expressing her grief for the vulnerable groups exposed to toxic smoke from the haze.

Under climate change, wildfire is predicted to increase in number. Dryer soil and a higher rate of evaporation are the scenarios in favour of starting a wildfire, both of which are the results of warmer global temperature.

There is a comprehensive list of environmental disasters which are manmade, and wildfire is only one of them. Unfortunately, the Muslim World, in general, is still left behind in the noble environmental sustainability effort.

There they are! Some Muslim countries are listed in the 2017 Sustainability Ranking by RobecoSAM (other countries excluded from the chart for easy reference). To compare, Sweden, a non-Muslim majority country has just regained the top position of the whole list. Full reports and charts from RobecoSAM could be accessed here.

Love for This World is Sinful, Isn’t It?

A lot of Muslims think that akhirah (afterlife) is the only thing that matters. To them, the extent of religiosity and piety are measured solely by the frequency of individual ibadah, both the compulsory (wajib) and the recommended (sunnah).

This is interesting too! Read also about  Smile, it’s a charity!

“Choose my dear: is it the Deen or the Dunya (worldly life)?” or so they say. 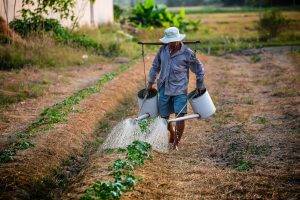 A Vietnamese man is watering the plants. Is planting trees considered as loving Dunya? Photo by Pixabay.

In actuality, there is a thin line between ignoring the world and detaching the tendency of the heart to the world. The difference lies in the intention and the love: working on the worldly errands does not necessarily imply that the biggest goal in life is the world.

For those whose biggest love and goal is the world, here’s what Allah says:

“Whoever desires the life of this world and its adornments – We fully repay them for their deeds therein, and they therein will not be deprived.” (Quran 11:15)

In the faith of Islam, the belief of a devotee is this worldly life is but a sowing land to be reaped in the Hereafter.

While it is true that our acts in this world would be queried, all of those are not merely about the individual aspects between Allah and us.

A lot of our religious duties are in fact closely related to our fellow human beings, the floras and faunas, the non-living rocks; to sum up, the world. Islam hence is not a religion of asceticism. Islam is a practical religion for the good of society.

To prove this, a lot of verses in the Quran and the sayings of Prophet Muhammad SAW mention about doing good deeds that are of service to the others, to name a few:

Holding ties of kins, as Prophet Muhammad said, “Whoever would like his provision to be increased and his lifespan extended, let him uphold his ties of kinship.” (Hadith recorded by Bukhari)

Helping people, as Prophet Muhammad said, “On every person’s joints or small bones (i.e. fingers and toes), there is sadaqah (charity) every day the sun rises. Doing justice between two people is sadaqah, assisting a man to mount his animal, or lifting up his belongings onto it is sadaqah, a good word is sadaqah, every step you take towards prayer is sadaqah, and removing harmful things from pathways is sadaqah.” (Hadith recorded by Bukhari and Muslim)

Give charity to the orphans and the poor, “Have you seen the one who denies the recompense? For that is the one who drives away the orphan, and does not encourage the feeding of the poor.” (Quran 107:1-3)

Interestingly, here is one of the religious duties trusted to mankind but seldom being talked about: preserving this green earth, as what Prophet Muhammad said:

“This world is beautiful and green and Allah has made you His representatives on it and He sees (all things).” (Hadith recorded by Muslim) 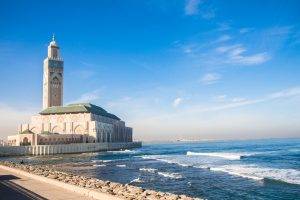 How amazing of this mosque to blend in with nature: it must be soothing to perform prayer and recite Quran here! Photo of Hassan II Mosque in Casablanca, Morocco that is built facing the Atlantic Ocean, by Pixabay.

In Islam, Environment Does Matter

One of the major worldviews a Muslim should have is about his or her role in the world: why Allah created man in the first place. Apart from being His slave, Allah told the angels that the role of mankind is as vicegerent or steward (Khaleefah) to manage the world according to His desire.

“Behold thy Lord said to the angels: “I will create a vicegerent on earth.” (Quran 2:30)

Allah made the earth and its natural resources; all subservient (Taskhir) for us, the steward, to gratefully exploit and benefit from. Being grateful in exploiting the earth means, making use of the earth according to the Islamic Law (Shari’ah) and doing it with the responsibility to maintain the balance and harmony of the environment: all these to attain Allah’s blessings and forgiveness in the akhirah.

(Did you know that the dos and don’ts regarding the preservation of the environment has been revealed by Allah and Prophet Muhammad SAW 1400 years ago? Watch some of them here.)

An accurately holistic view of this world and the hereafter should create a pious, loving and thoughtful Muslim who appreciates the great blessing of this world. He or she would view the preservation of the environment out of love: to ease one’s daily life; to care for the others and for the future generation; to benefit from the biodiversity and the environment with good manners without stressing them, out of human greed.

Thus, the environment is another responsibility upon man, in addition to other duties such as prayers, fasting and hajj. It should not be neglected and be allowed to be subjected to man’s greedy, wasteful, and arrogant exploitation.

The great news is, Allah will give His reward for the effort we put into preserving the environment. How beautiful is that? 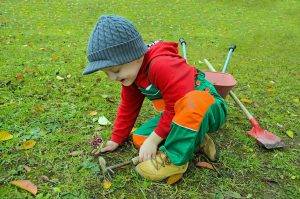 This little boy also wants to help in preserving the environment. When will be our turn, as a pious Muslim? Photo by Pixabay.

As things stand now, the Muslims worldwide has to change their view on the environment and incorporate the sustainability agenda in their daily life. It does not have to be top-down from those in power, the individual and society at large could also create an impact! Even a very small deed contributing to the noble aim would be surely taken into account by Allah in the Hereafter, for He is The Most Just (al-’Adl) and The Most Accounter (al-Hasib).

This is interesting too! Read also about  6 Suggestions on How to Identify Revert-friendly Sites

A small effort on worldly fire or hellfire? Let’s remind ourselves to the anecdote of a small bird who tried to bring water in its beak to help in putting out the fire that was burning Prophet Ibrahim AS. When the bird was being ridiculed, it replied with all its heart full of hope and fear:

“I know that it isn’t much, but I am afraid in the Hereafter when Allah The Judge asks me: What did you do to help my prophet that was burned by Namrood, and I would have nothing to back me up.”

For a remark, it is the fear of His Hellfire that we would put all our effort into halting wildfire. 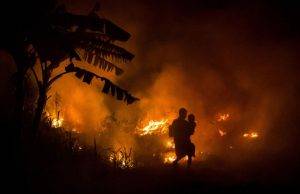 A man carries his son home to a burned peatland at Ogan Ilir, South Sumatra, Indonesia. He might be wondering, where are all the other Muslims to help them? Photo by Ulet Ifansasti, Gettyimages.

An extra tip: It is also important to protect your families and homes from wildfires in this worldly life! Learn how the households can avoid causing and spreading wildfires here.