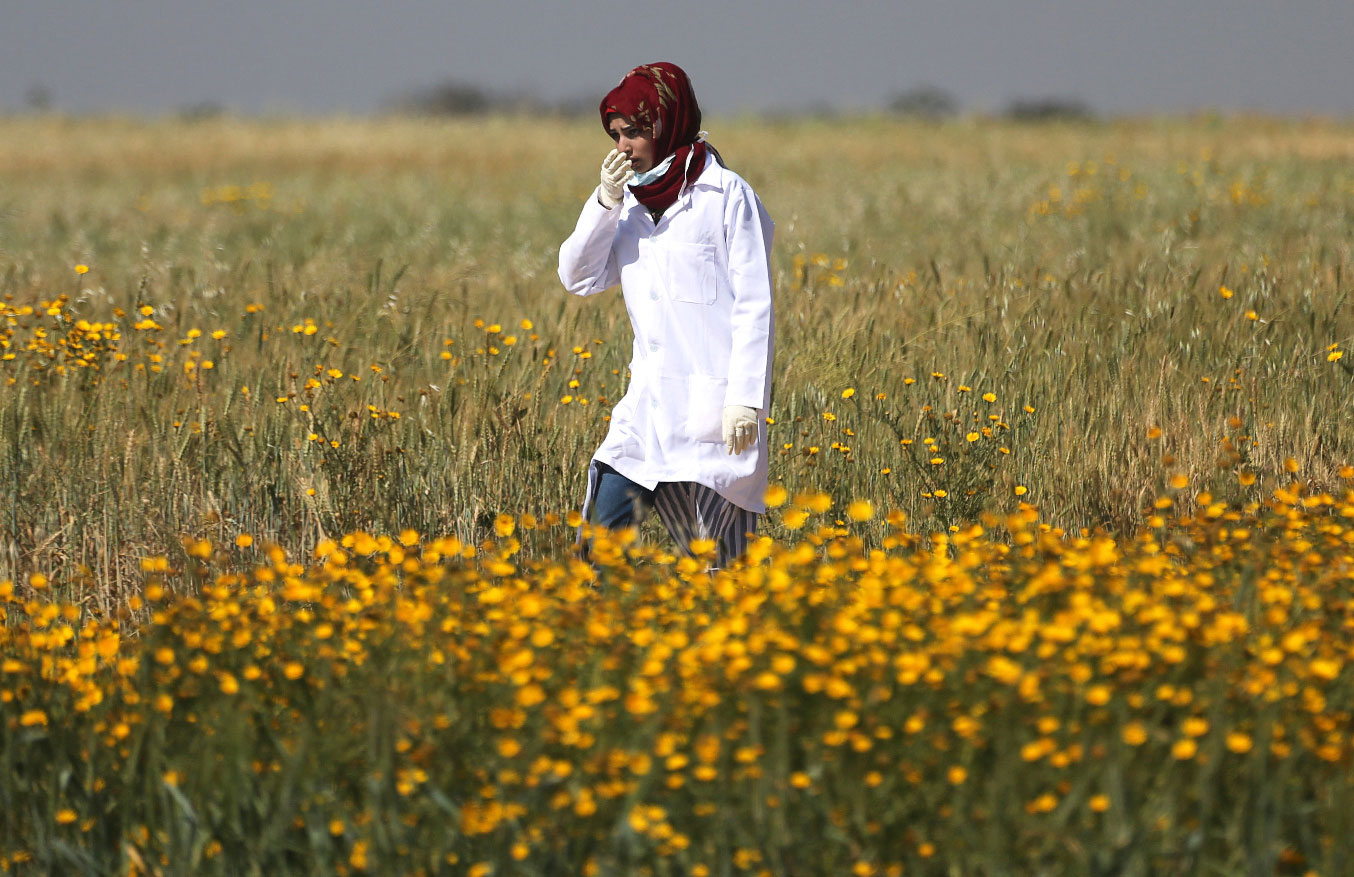 Featured image: Razan al-Najjar or they now called her ‘The Angel of Mercy’. Image source

“We have one goal: to save lives and evacuate people. And to send a message to the world.”

“Without weapons, we can do anything. We volunteer here every day. We do this for the love of our country. It’s humanitarian work.”

“We don’t do it for money. We do it for Allah. We don’t want to get paid or be employed.”

These words of her would be crafted strongly in the hearts of the Palestinians and Muslims worldwide following her death. Razan al-Najjar, 21, was shot at her chest by Israeli soldiers when she was trying to help a wounded person at the Gaza-Israel border fence on June 1st.

Being honored as the only female medical volunteers to treat the Palestinian protesting citizens fighting for their land, she shed that light of inspiration during her interview with New York Times, a month before Allah called her home to grant her Paradise. 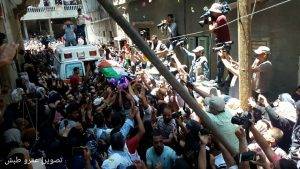 Razan’s body (center) was wrapped in the Palestinian flag during her funeral. Image source

What could contain the tears of her fiance, Izzat Shatat, 23, a volunteering ambulance worker?

“She helped all people and had never refused to help. She was the first to run toward anybody when he is shot.” Izzat also told that their engagement was set to be announced at the end of Ramadan. 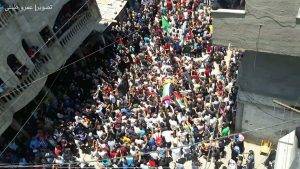 Thousands of people mourned her loss. What about us? Image source

“I’m proud of my daughter,” Razan’s father, Ashraf previously commented on her volunteering there. “She provides care to the children of our country.” On her loss, he said, “My angel left this place, she is now in a better place. I will miss her so much. May your soul rest in peace, my beautiful daughter.”

Her mother, Sabreen, regretted that incident so much that a great emptiness would be left at home without Razan, who was the eldest of six siblings.

“I want the world to hear my voice … what’s my daughter’s fault?”

Razan Najjar was a 21-year-old Palestinian medic. She was murdered by an Israeli sniper while giving medical aid to wounded protesters.

Her heartbroken mother goes through the clothing and ID she was wearing the moment she was killed. pic.twitter.com/bF1hH5pX9w

What’s all the fuss about

Article 24 of the 1949 Geneva Convention I provides, “Medical personnel exclusively engaged in the search for, or the collection, transport or treatment of the wounded or sick, or in the prevention of disease, staff exclusively engaged in the administration of medical units and establishments … shall be respected and protected in all circumstances.”

This is interesting too! Read also about  These New University Students in Thailand Took A Long Walk During Their Orientation Week. Here's Why. 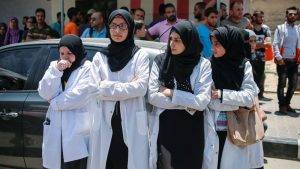 “Medical workers are #NotATarget! My thoughts and prayers go out to the family of #Razan_AlNajjar! #Palestinians in #Gaza have had enough suffering,” United Nations Special Coordinator for the Middle East Peace Process, Nickolay E. Mladenov tweeted in response to this tragedy.

The local U.N. humanitarian coordinator, Jamie McGoldrick, also gave a similar tone. “The killing of a clearly identified medical staffer by security forces during a demonstration is particularly reprehensible.”

Even Jewish Voice for Peace (JVP) condemned her killing.

Nurses responding with 💔and anger at the killing of #Razan al-Najjar, 21 year-old volunteer medic of Gaza who cared for the injured and dying in Gaza's protests for freedom and the right to return. pic.twitter.com/92y4VusI8g

“Today, our thoughts are with the family of Razan, and with our colleagues from the PMRS (Palestinian Medical Relief Society). Such attacks on health care must not happen and we need to enhance our efforts to ensure the protection of our frontline health workers. There are clear obligations to safeguard healthcare under international law and these must be respected,” Dr Gerald Rockenschaub, Head of the WHO office.

This is interesting too! Read also about  I’m planning to celebrate Christmas

Razan was wearing a medical uniform, vests and bags, and not carrying any weapon when she was shot directly. She was trying to retrieve and evacuate those who were injured. 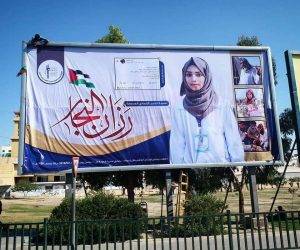 A large billboard carrying the photo of Razan was installed in Gaza city. Image source

It is claimed that the shooting is not random since it was just the paramedic team and there were no protesters around during the shot, according to al-Jazeera report.

This is the response of Israel Defense Force spokesperson via the Twitter: “Nothing was carried out uncontrolled; everything was accurate and measured, and we know where every bullet landed.” However, the tweet has been deleted afterwards although some Twitter users managed to take a screenshot of it beforehand. 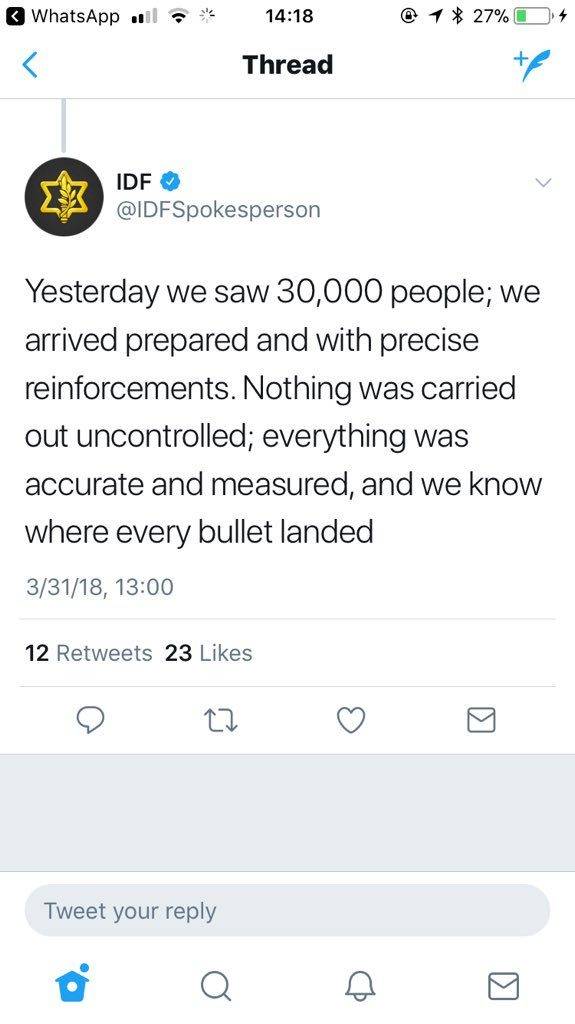 World Health Organization also reported that 238 health personnel and 38 ambulances have been targeted by Israeli forces since March.

In 1948, Israel forced about a million Palestinians out of their Palestinian land and built its own country there. Ever since that day, the Palestinians were never allowed to return to their occupied lands.

People around the world are expressing their condemnation and grievance for the loss of Razan. She has since become an inspiration for the Palestinians and also the nurses, women and youths worldwide.

Here are four highlights about Razan that you may learn from her life to become a better Muslim.

1. Care about your mother and family Razan’s mother, Sabreen Najjar showed the vest worn by Razan when she was shot. Beside her was Razan’s father, Ashraf Najjar. Image source

“She was like a butterfly, always care for her siblings,” Sabreen told about Razan. “She went and bought new clothes for them for Eid.”

This is interesting too! Read also about  How do you feel when it rains?

“Today I want to get a present for them, mum,” Razan previously told Sabreen. Sabreen said that Razan always asks her if she could bring anything to her.

2. Put other people before yourself 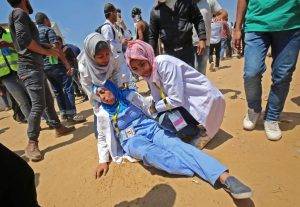 Razan helps an injured colleague on May 15. Photo courtesy of Said Khatib/AFP

“She (Razan) didn’t give up. She helped so many, and saved so many,” Sabreen kept on telling about Razan, who was the first female paramedic in Gaza. “Razan also used to come home with blood covering her uniform. She used to stay at the protests until everyone had left,” she continued.

A paramedic who was with Razan said she was running to help a protester near the Gaza fence that had been wounded, “I told her it is dangerous but she said she’s not afraid to die and wants to help the wounded.”

Razan helped treating around 70 wounded Palestinians in one day for 13 hours a day, from 7 a.m. to 8 p.m.

3. Be proud and firm with your passion, despite the difficulties 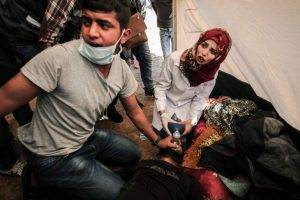 Razan works with a colleague to tend an injured man at an emergency medical tent in the southern Gaza Strip. Photo courtesy of Said Khatib/AFP

“The first day was the hardest for me. I suffocated from tear gas three times,” Razan told the TRT World reporters exactly two months before she was shot. “The entire medical team was targeted.”

She said that one of her colleagues was shot on the back, while others on the head and near the ear. It was hard, but Razan kept on giving her best.

4. Be sincere and trust Allah 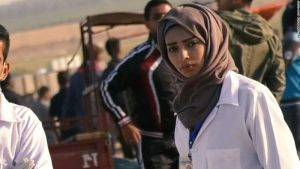 Razan, a symbol of bravery. Image by PMRS

Razan was volunteering without pay in the medical team. “We don’t do it for money. We do it for Allah. We don’t want to get paid or be employed,” she said.

“Razan told us she wasn’t afraid, she felt obliged to help and was clearly wearing a medical vest,” Sabreen said. Each time before heading out to help, she would tell her mother and father,

The Angel of Mercy

“I wish I could have seen her in her white wedding dress, not her shroud.”

To Razan’s cousin, Dalia al-Najjar, Sabreen told her this:

“You are Razan now, hold the torch and keep fighting.”