A to Z Interesting Facts about Ramadan (Part 2)

(Have you read the first part here?)

This blessed night in Ramadan signifies the sending down of the Quran from Allah to the world.

“Verily, We have sent it (this Quran) down in the Night of Power. And what will make you know what the Night of Power is? The Night of Power is better than a thousand months. Therein come down the Angels and the Spirit (Gabriel) by Allah’s permission with all Decrees. (All that night), there is peace (and goodness from Allah to His believing slaves) until the appearance of dawn.” (al-Quran 97:1-5)

What is worth to note is Allah describing the night as being better than a thousand months. While the period would be over 83 years, the phrase is usually used in Arabic to describe a large number.

With such value, imagine performing ibadah on that night and it would be worth 83-years of ibadah, or even more!

“That is a golden opportunity. When is that night?” The answer is, we would never know. Allah hides from us the exact date of the night so that we would strive each night to stumble upon the blessed opportunity.

Fair enough, let’s go for it each night!

What Ramadan has in store would assuredly make you fall in love.

First and foremost, the main purpose of the whole month is to achieve piety, makes all the other offers and ibadah to be directed towards it. Fasting, night prayer, giving charity and zakat, you name it.

Next is the blessed and conducive environment Ramadan offers to us:

“When the month of Ramadan starts, the gates of the heaven are opened and the gates of Hell are closed and the devils are chained.” (Sahih Bukhari, Hadith 1899)

The rewards in Ramadan are also greatly multiplied that you would not want to miss any single second this month, to make the most out of it.

This is interesting too! Read also about  Why Punish A Muslim? #PunishAMuslimDay

On top of these, you could get rewarded in full just like another person who fasts, by treating him to Iftar (It is for the value of the reward, you still have to fast nevertheless). 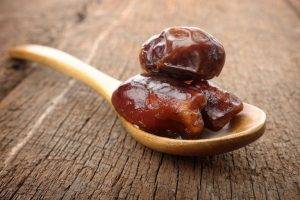 Even if you just offer him a date-fruit! Image source

Piety: the main purpose of fasting in Ramadan.

So what exactly it is to be pious? The original Arabic word is Taqwa which means ‘to take protection’. Taqwa would protect you from committing sin or evil.

Why is that? Having taqwa implies that you are extremely cautious with everything you do in your life so that none of them would be against Allah’s decree. In other words, a God-fearing person.

Let’s evaluate ourselves: have we gained taqwa at the end of the last year’s Ramadan? (Ouch) 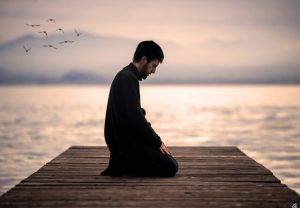 The expression of Taqwa is not only through doing more and better ibadah. It should also improve our life, our interaction with people and our quality at work. Image source

“The month of Ramadan (is that) in which was revealed the Quran, a guidance for the people and clear proofs of guidance and criterion.” (al-Quran 2:185)

Our relationship with the Quran should not be limited to listening to the Imam during Taraweeh prayer only, given the relationship between the Quran and the month of Ramadan.

Allocate extra time to recite the Quran through the day and night, as compared to the previous months. Already did so? Move further ahead: take a moment to read the translation and tafsir, understand it and share what we learned with our friends.

By doing so, Ramadan will not just be the month of the Quran for us, but for the others as well.

Ramadan comes from the Arabic word ‘ramad’, which means intensely heated by the sun.

Why the name? One of the reasons is the Arabs renamed the months from their ancient names based on the seasons in which they fell. In this case, Ramadan fell on the month with intense heat, hence the name.

This is interesting too! Read also about  What to Prepare Before Ramadan

Another reason is due to Ramadan is the month that burns the sins of the people with righteous deeds, according to al-Qurtubi.

Despite the heat, Islamic history mentions some significant events occurring during this month. Maybe we should look into the stories and borrow the spirit! 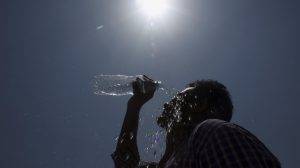 Saudi Gazette reported a possible temperature of 65°C (149°F) in Saudi Arabia during Ramadan in 2015. Image by AP

It is the meal taken before dawn. Although you may still be full from the Iftar last night, it is recommended to wake up and eat the Suhoor.

There are two pearls of wisdom behind Suhoor. Firstly, Allah wants us to be well-prepared to stay active and productive throughout the day.

It is advised then to plan our meal, so it is highly nutritious while providing us with long-lasting energy.

Secondly — and the one people always miss — we should take the opportunity to perform night prayers while waiting for the Fajr.

It is like killing two birds with one stone! (No, do not kill birds.)

In the final year of Prophet Muhammad’s life, he came out one night and prayed Taraweeh. Some of the Companions followed him along.

As for the following days, more Companions came over and joined them. However, the Prophet prayed at home on the fourth night, while the mosque was packed with the Companions waiting for him. He said,

“Nothing prevented me from coming out to you except the fact that I feared that it would be made obligatory for you.” (Sahih Muslim)

Taraweeh is highly recommended (sunnah muakkadah) and is only performed during Ramadan. The word itself means to relax or rest since our pious predecessor used to rest in between every four rakaahs due to the long prayer. 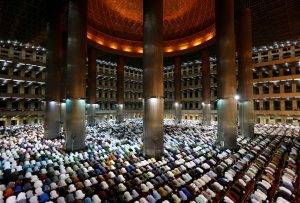 Taraweeh prayer in Istiqlal Mosque, Indonesia on May 16, 2018. Image source 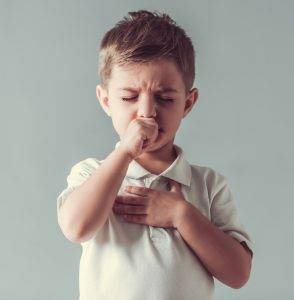 You know that guy, he… ehem… I’m fasting. Image source

While backbiting would not invalidate your fast, restraining the tongue is also highly recommended during the month of Ramadan.

This is interesting too! Read also about  6 Suggestions on How to Identify Revert-friendly Sites

(Backbiting is still sinful, by the way).

For fasting by nature teaches restraint, Allah did emphasize that someone who fast should also guard his tongue and utter nothing but kind words.

“Whoever does not give up forged speech and evil actions, Allah is not in need of his leaving his food and drink (his fasting).” (Sahih Bukhari, Hadith 1903)

Allah is not in need of your struggle: what a piece of strong advice to take note.

Do you know that people around the world have a different period of fasting during Ramadan?

The restraint is between Fajr and sunset, however different locations around the world have a different period of a day. 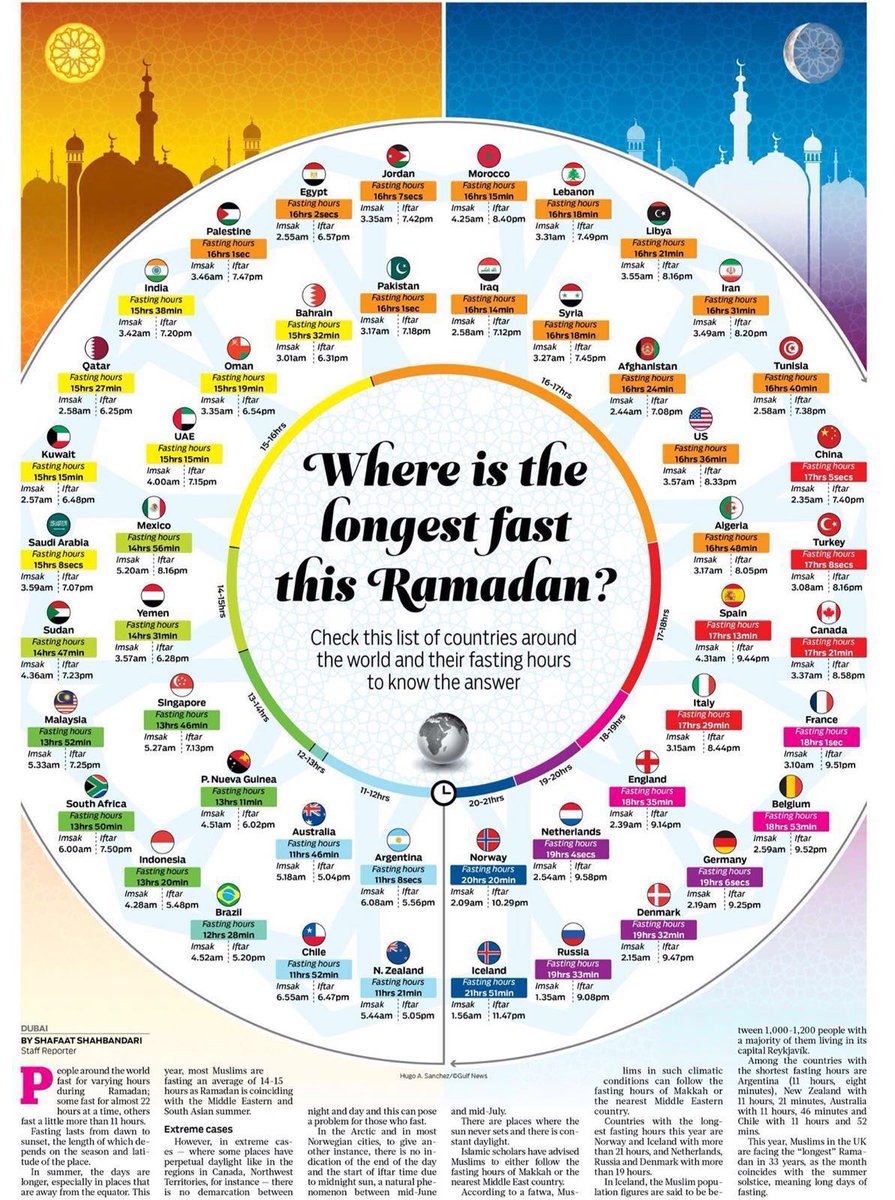 Period of fasting around the world this Ramadan. HUGO A. SANCHEZ/Gulf News

The word Witir means ‘odd number’ in Arabic. Witir is the strongly encouraged last prayer of the night which is performed in the odd numbers of rakaahs, i.e., 3, 5, 7 and 9, although one rakaah is also acceptable.

Witir can be performed any time between Isya prayer and Fajr prayer. During the month of Ramadan when Taraweeh prayer is performed in congregation, Witir is after Taraweeh together with the Imam.

“Praying in the night is two by two (rakaahs). So when you fear the dawn (is near) then make it odd by one, and make that the last of your Salat odd.” (Jami’ Tirmizi, Hadith 437, Sahih)

Since this obligatory fasting comes with the month, Ramadan fasting is an annual practice.

It is also worth noting here that people with terrible sickness or in their travel are permissible to break their fast during the day. However, they have to replace their missing days of fasting in any of the following months, before the next upcoming month of Ramadan.

Hence, let’s not just deliberately forget about the missing days!

For the last but not least. Zakat, as one of the pillars of Islam, serves principally as a welfare contribution to poor and deprived individuals.

In Ramadan, Muslims have to pay Zakat al-Fitr once in the month. The deadline is before the Eid al-Fitr prayer. 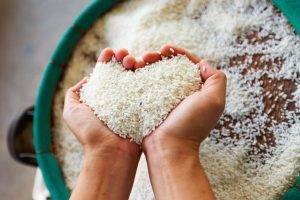 Give to the poor to purify our heart. TONOGRAPHER/SHUTTERSTOCK

We hope that you learn something new from this article!