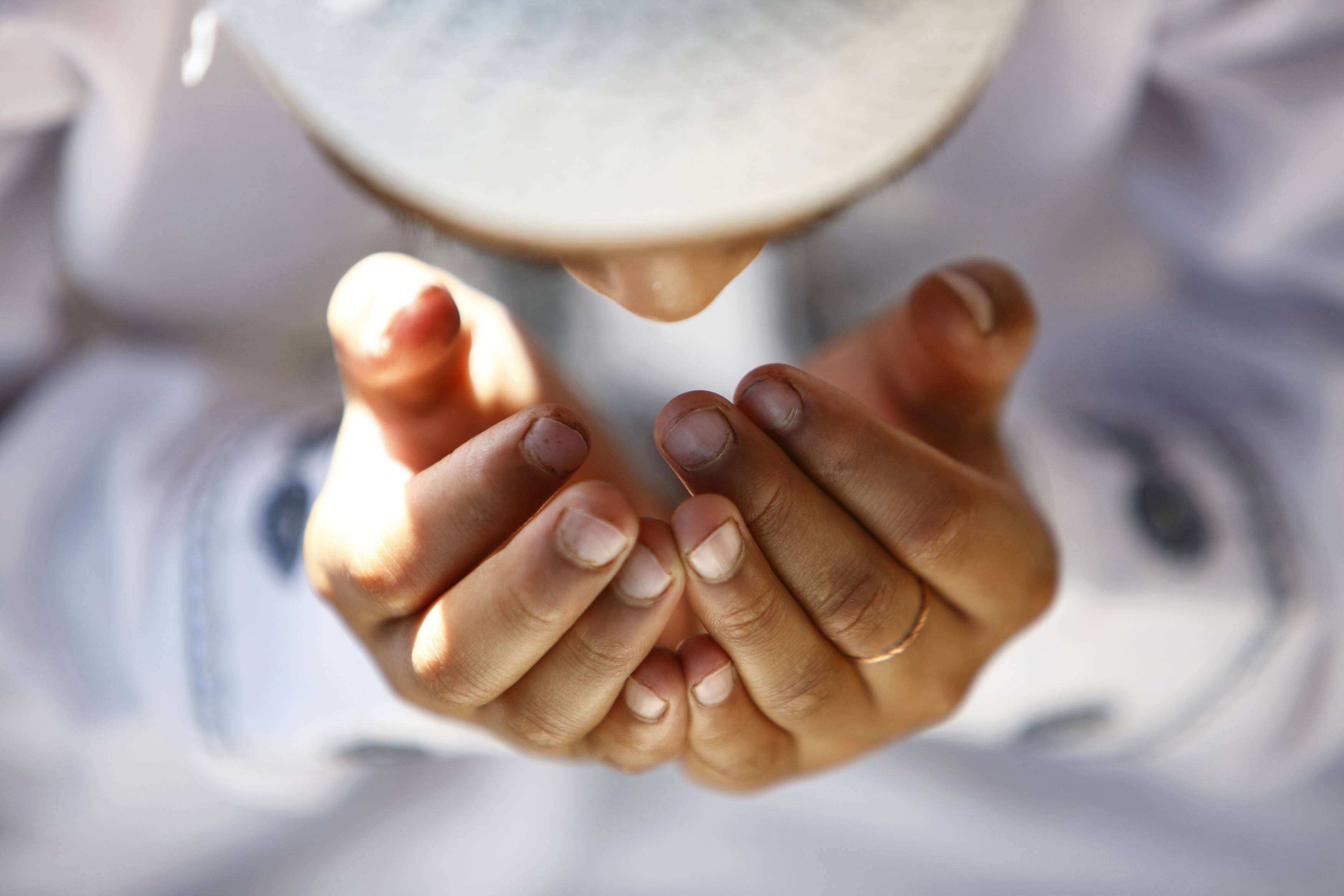 A to Z Interesting Facts about Ramadan (Part 1)

Let’s praise Allah for giving us the opportunity to step into the holy month of Ramadan this year.

For those who will experience their first Ramadan ever in their life, be steadfast and believe that this would be one of those meaningful moments in your life.

Here is A to Z interesting facts about Ramadan you might not know before. This could be a long list, so keep scrolling until the end! 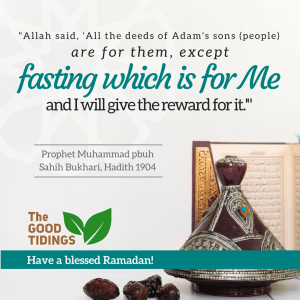 Fasting is for Allah.

Yes, all of us know that Muslims worship Allah alone. The interesting point to highlight is Allah singles out fasting so that He Himself determines the rewards of those who fast.

Why is this so? A Muslim scholar, Ibn al-Jawzi commented: All acts of worship can be seen when done, and they may be contaminated with some element of showing off, unlike fasting.

Another scholar, al-Qurtubi further supported this, “No one can see when a person is fasting except Allah.”

(Does Allah want to torture us during Ramadan? Read also our article: Ramadan is a Month of Torture, Isn’t It?)

Islam is built on five main pillars or backbones, and fasting is one of them.

“Islam has been built on five [pillars]: testifying that there is no deity worthy of worship except Allah and that Muhammad is the Messenger of Allah, establishing the salah (prayer), paying the zakat (obligatory charity), making the hajj (pilgrimage) to the House, and fasting in Ramadhan.” (Sahih Bukhari, Hadith 8)

Imagine a house being erected: strong pillars would be the most important part of the house from the beginning until the end of time. 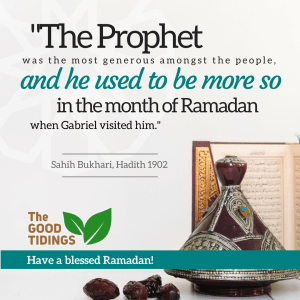 Prophet Muhammad, peace be upon him (PBUH) is the most generous of all. Even so, his generosity was at its peak during the month of Ramadan.

“The Prophet was the most generous amongst the people, and he used to be more so in the month of Ramadan when Gabriel visited him.” (Sahih Bukhari, Hadith 1902)

Since the Prophet is our role model, why don’t we learn from him with regards to his generosity in Ramadan?

This is not about the date as on the day of the month in a year. Instead, this is about a staple food across the Middle East. 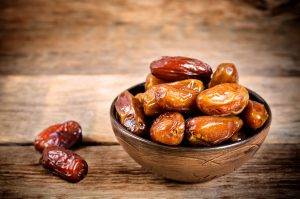 Dates: what Prophet loves are so good to follow. Image source

There is remarkable wisdom behind the relationship between eating dates and fasting: dates are excellent for fueling an empty body. Apart from being high in water content, sugar and nutrition, dates are easily digested to return the level of body glucose to normal quickly.

This is interesting too! Read also about  Ramadan Made Easy - Ep 02: Fasting During Lockdown

Even more interesting, eating dates before another meal during breaking fast would satisfy the sensation of hunger, thus reducing overeating. (Yes, we know how Muslims usually get our revenge after not eating all-day.)

(Dates help to overcome our expectation of thirst and hunger. Read also our article: A Revert’s First Ramadan: Expectations and Realities)

You are right: it is still too early in Ramadan to discuss Eid (well, not alphabetically so).

Eid al-Fitr (one of the meaning: Festival of Breaking The Fast) is celebrated on the day after the month of Ramadan. On the first day of Shawal, Muslims offer the Eid prayer to Allah The Almighty to express their gratitude for being able to achieve success in the month of Ramadan.

Eid is the day of celebration, full of joy and happiness. It is even prohibited to fast during Eid to allow a quick break from the journey of making them a better Muslim. 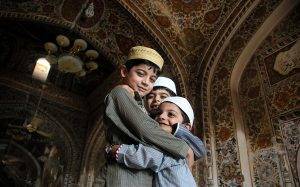 Fasting is one of the significant things in Ramadan, although Ramadan is not all about fasting.

Throughout the month of Ramadan, Muslims are obliged to abstain themselves from eating, drinking and sexual activity from the crack of dawn until sunset. They also have to avoid gossiping, backbiting, use obscene words, and things that could reduce the reward of fasting.

Fasting has a lot of benefits, both spiritual-wise and physical-wise. Strengthening our faith, bringing us closer to Allah and controlling our worldly desires are the former objective of fasting. The extra gaining of health, however, is for the latter. 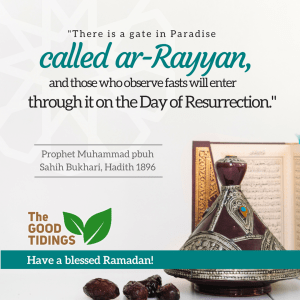 Prophet Muhammad mentioned a special reward for those who fast.

“There is a gate in Paradise called ar-Rayyan, and those who observe fasts will enter through it on the Day of the Day of Resurrection.” (Sahih Bukhari, Hadith 1896)

How does this gate mean to us? Allah blessed the people who fast with this exclusive blessing. Their value is highlighted in Paradise by having them entering Paradise through a special gate, solely and wholly for none other than those who fast.

How amazing is that?

The determination of month in the Islamic calendar is according to the lunar calendar, i.e., based on the position of the moon. Hilal, an Arabic word which translates to new moon, marks the start of an Islamic month.

This different type of calendar thus is the reason behind why the date of Ramadan changes each year in the Gregorian solar calendar.

Observing Hilal is one of the oldest ways to ensure when is the day to start fasting. With today’s advancement in astronomy, the date to start fasting could be obtained from precise mathematical calculations. The example of Hilal which marks the first day of the month in Islamic calendar. Image: Ray Photography/Kafe Astronomi 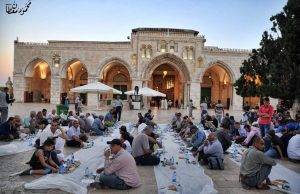 Muslims having Iftar at the compound of al-Aqsa Mosque, Palestine. Image: Palestine Social

Iftar is an Arabic word which means breaking the fast. Iftar is during sunset when fasting Muslims are allowed to eat and drink again.

Muslims usually start their Iftar with dates and water, or light meals, to put it simply. It is after performing the Maghrib prayer that they will have a proper meal.

Some Muslims prefer to have Iftar together with their family, while others opt for having Iftar in the mosque. There, free meals are prepared for anybody who wishes to come over.

“Fasting is a shield against the Fire just like the shield of anyone of you against fighting.” (Sunan Ibn Majah, Hadith 1639, Sahih)

Through the act of fasting, we are required to abstain ourselves not only from the commonly allowed eating and drinking, what more of the prohibited (haraam) ones. Fasting then acts as a platform to prevent us from doing sins, thus from entering the Hellfire. 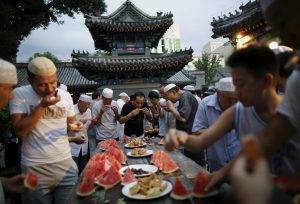 ‘Ramadan Kareem’ would be one of the most common greetings during this month.

This is interesting too! Read also about  The Art of Asking: A Muslim Experience

Kareem is an Arabic word means generous or noble. Coining both words Ramadan and Kareem would contextually mean ‘Have a Generous Ramadan.’

However, there are some discussions among scholar on this phrase since Allah is the Most Generous and Ramadan by itself could not be generous. Also, this phrase is unheard of during the age of the Prophet and his Companions.

Hence, a better phrase for greeting and praying for each other during Ramadan would be ‘Ramadan Mubarak’. This phrase appeared in some of the Islamic narrations, and contextually has better meaning: ‘Have a blessed Ramadan!’ (Being a revert, the first Ramadan could be tough. Here are some quotes by the reverts from around the world regarding their first Ramadan!)

A lot of people are committed to their fasting during Ramadan just for the sake of losing weight.

Such intention, however, is slightly wrong: one’s sole intention of fasting in Ramadan should be for the sake of Allah and as an ibadah. As a consequence, Muslims would focus on having more recitation of al-Quran, performing prayers, offering charity and other good deeds.

Losing weight should just be the side benefit from observing fasting, not the sole intention. The one-month training for our desires should make us an individual with better discipline and control of ourselves, then the aforementioned benefit.

Although, to tell the truth, the meta-analysis of scientific studies on the effects of Ramadan fasting on body weight found that the weight changes during Ramadan were relatively small and mostly reversed after Ramadan, gradually returning to pre-Ramadan status. 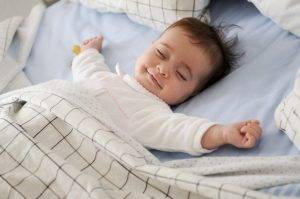 Especially when we just sleep all day long during Ramadan. Image: javi_indy/SHUTTERSTOCK

“Whoever observes fasts during the month of Ramadan out of sincere faith, and hoping to attain Allah’s rewards, then all his past sins will be forgiven.” (Sahih Bukhari, Hadith 38) Allah, with all His Mercy, has prepared the platform of Ramadan for us to focus on and put our best effort. Despite the difficulties, He also added extra blessings for us: the gates of heaven are opened wide, the gates of hell are shut tight, and Satan are chained. Allah knows that we would not be able to survive a month of fasting, so He makes us break our fast each day during sunset.

The only struggle left is between ourselves and our desires.